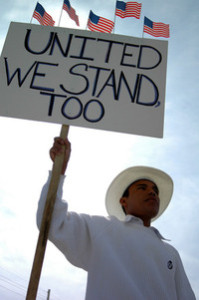 Recently, congress passed a law creating the “U-Visa” program which provides legal status to illegal immigrants who are victims of crimes such as sexual assault or domestic violence and other serious crimes. The purpose is to provide police with an added tool to protect victims and encourage witnesses who are residing here illegally to cooperate the police. Given the rise of illegal immigrants to the United States, the U-Visa program is great program to help those least likely to help themselves due to their legal status.

There is a major flaw in the program is bureaucracy itself. For example, the great majority of criminal offenses are prosecuted at the state level, yet it is the United States Immigration and Custom’s Enforcement Agency that approves the U-Visa. The initial test cases show that the process for approval for this visa can be long and mired in administrative delays between the federal and state and local governments. The process first starts with the local police and county prosecutor’s office obtaining the witness’s information, processing the paperwork at the state level, and then making a series of phone calls to contacts both at the state and federal level. In a busy police department, such as the New York Police department, the work involved can lead to inordinate delays. Currently, there is purported a backlog of 64,000 applications, yet only 10, 000 can be approved each year.

The delay causes another problem regarding the witnesses or victim’s safety depending on the nature of the offense. The delay can cause the witness, likely someone skeptical of government protection, to change his or her mind with respect to cooperation. Moreover, the delay can lead to a delay in the trial or criminal proceedings giving more time to the perpetrator or his or her family to intimidate or threaten the witness.  Generally, law enforcement wishes to prosecute crime on an expedited time-frame. On the contrary, the defense generally benefits from delays. With passing time, one can see a witness having second thoughts of testifying or even leaving the state or county; evidence being lost or misplaced; and, most commonly, the witnesses fading recollection of the events that can be exploited on cross-examination at trial. From the defense perspective, this program would also be available to defense witnesses. Many times, I have represented illegal immigrants in trial matters, and many witnesses, who are also illegal, have refused to assist my client due to fear of deportation should they reveal themselves to law enforcement. That fear will hopefully be abated by the full implementation of the U-Visa program.

These administrative delays in the U-Visa program are being addressed by immigrant advocate groups in hopes of streamlining the process. This involves allowing applicants to apply within 14 to 90 day windows, thereby staying a potential deportation or given the potential answer within a reasonable period of time. The U-Visa program is no doubt a step in the right direction, yet it still has many administrative hurtles to overcome, most notably the bureaucracy inherent in a system that created it.